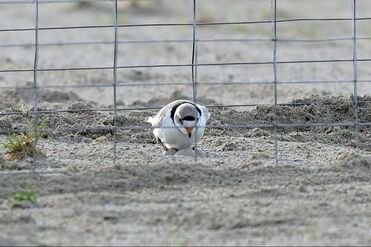 ​Always monitor from outside the fenced perimeter.

Do not enter the closed off area unless you have specific instructions or an immediate threat is keeping the birds from the nest (e.g. trash against the predator guard).

Survey for both plover adults. If possible, check leg bands to confirm which adults you are watching if both birds are not seen at the same time, or learn them by plumage differences.

Check physical fencing that has been established around the nesting area. Ensure signs and ropes/fence are intact to ensure closure of the nesting area. While checking the perimeter fencing look for signs or tracks in the sand suggesting someone or something (i.e., predator) has entered the area. If there is an issue with the fencing, contact the park office at 419-836-7758.

Documenting in the daily form so that all those monitoring are aware of changes in behaviors or perceived threats to focus on.

Some duties remain important throughout the season:

Watching for predators and other threats. Recognizing what potential threats are present is always helpful. Signs (i.e., tracks) of skunks, raccoons, coyotes, mink, etc. is good to know during incubation, and later expanding to include Great Blue Herons, gulls, Killdeer, and other species that might take a chick. Merlin, Cooper’s Hawks, and Peregrine Falcons are major threats and should be reported on the daily form.

Type E Botulism is a significant threat to adults and young. The most likely source of Botulism toxin affecting Piping Plovers is ingestion of maggots from carcasses of birds or fish that died of botulism poisoning. If there are birds dead on the beach you need to contact the group immediately. The most commonly affected birds are Ring-billed Gulls, Double-crested Cormorants, Caspian Terns and, later in the summer, Horned Grebes, and diving ducks. Botulism E poisoning in birds is initially seen as paralysis. Affected birds will be unable to hold their wings in the folded position. The wings will hang low and the bird will continually try to pull them up. As the paralysis progresses birds are unable to walk and finally can only move their heads weakly. The best way currently known to protect Piping Plovers from botulism E is to remove and double bag and throw in garbage cans or bury carcasses before maggots can develop. Report any birds showing signs of botulism, or any dead birds or fish to the plover interns.